There's an old medieval recipe for trayne roste at Historic Food dot Com! It strikes me as a hybrid spitcake, in that it's prepared a bit like baumkuchen and a bit like chimney cakes. A prepared stripe is wrapped around a spit, like chimney cakes (though here the stripe is made of fruits and nuts, not yeast cake). Then batter is dribbled onto the cake while it turns by a fire, like baumkuchen!

Historic Food claims the trayne roste is a direct ancestor of the gâteau à la broche, which is neat if it's true. Blanched almonds and dried nuts are threaded on a thread as long as a man is tall. That gets coiled around the spit and drizzled with a batter made of flour, wine or ale, ginger, sugar, saffron, cloves, salt, and other spices. AND THAT'S HOW YOU TRAYNE ROSTE. 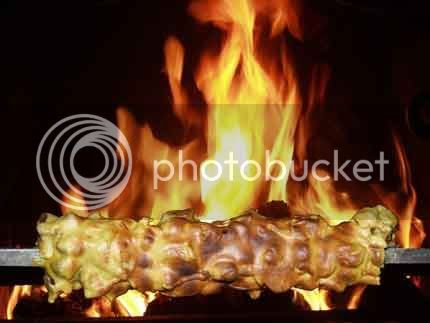 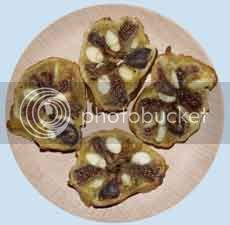 Slices showing the cake anatomy. [ibid.]
Posted by Ushanka at 9:56 PM No comments:

I am conflicted about posting this recipe

I don't really like the taste of black pepper. That said, Bravo TV posted this recipe, so I'm sharing it with you!
Black Pepper Baumkuchen
Nice job, chef Morgan Wilson!
Posted by Ushanka at 10:27 PM No comments:

I Did Eat Some Gâteaux à la Broche

I'll never outgrow this cakeblog. I will return to it every so often! However, I will find other things to do for years on end.
FIFTY-THREE WEEKS AGO, I ate a gâteau à la broche. Fifty-two weeks ago, I ate a second one, from a different place. And yet I am only getting around to discussing them now! To quote a fellow Mudd alumnus, "I am grossly incompetent."
It was a pretty fantastic weekend, a year ago. I am still a little ashamed to admit that I scheduled twenty hours of bus and train rides so I could spend eighteen hours in a little Pyrenean hamlet. It was around six in the morning when I reached Tarbes, pronounced "tau(gurgle)b". When the daily food market opened, I was there, and ready to get some spitcake! 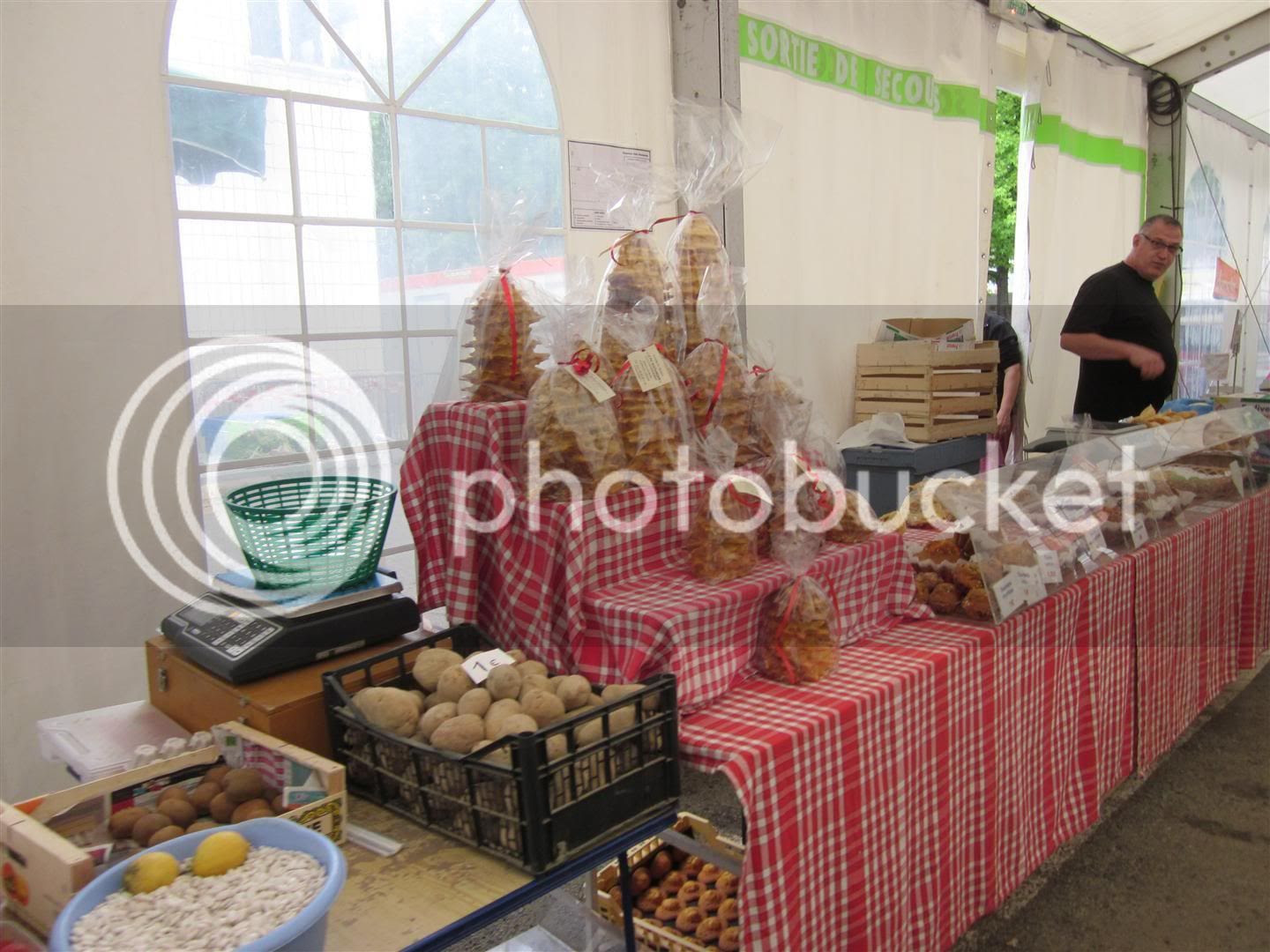 No better way to start my day! 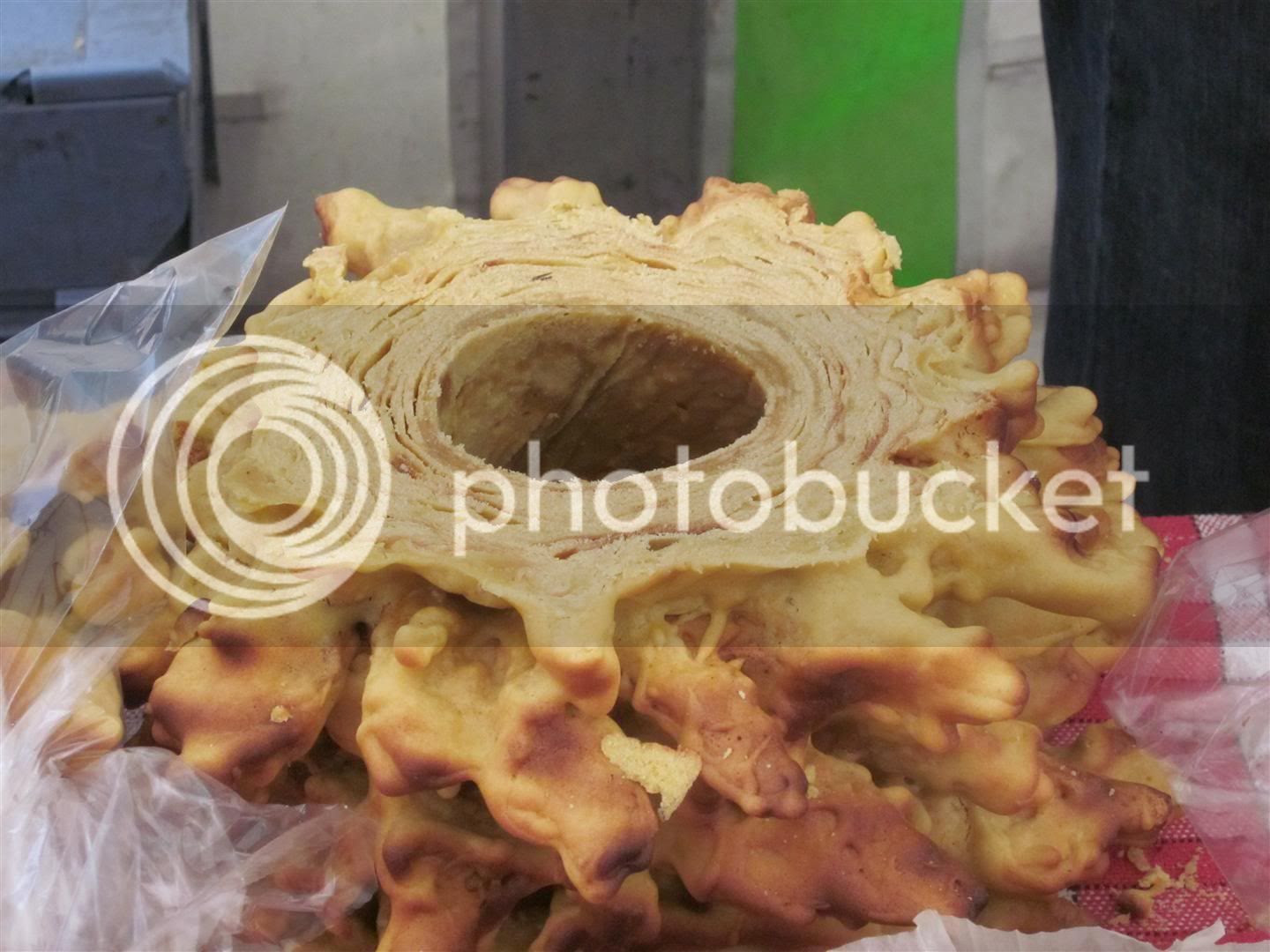 Cross-section of the cake the patissier was free-sampling off of.


The above pictures show cakes from Le Pic Bigourdan, which as far as I can tell is an enterprise that only sells through these farmers markets. Anyway, look at that cross-section! It belies the irregularity of this type of spitcake. The dribbled batter doesn't make coherent layers. Not in this bakery's cakes, at least...
I bought a small cake from Le Pic Bigourdan and carried on. After some misdirection and a delightful run-in with an Esperantist, I reached the Védère Café in Montgaillard, which I mentioned in my previous gâteau post! Before buying another cake, I tried a slice in their dining-car-turned-café. 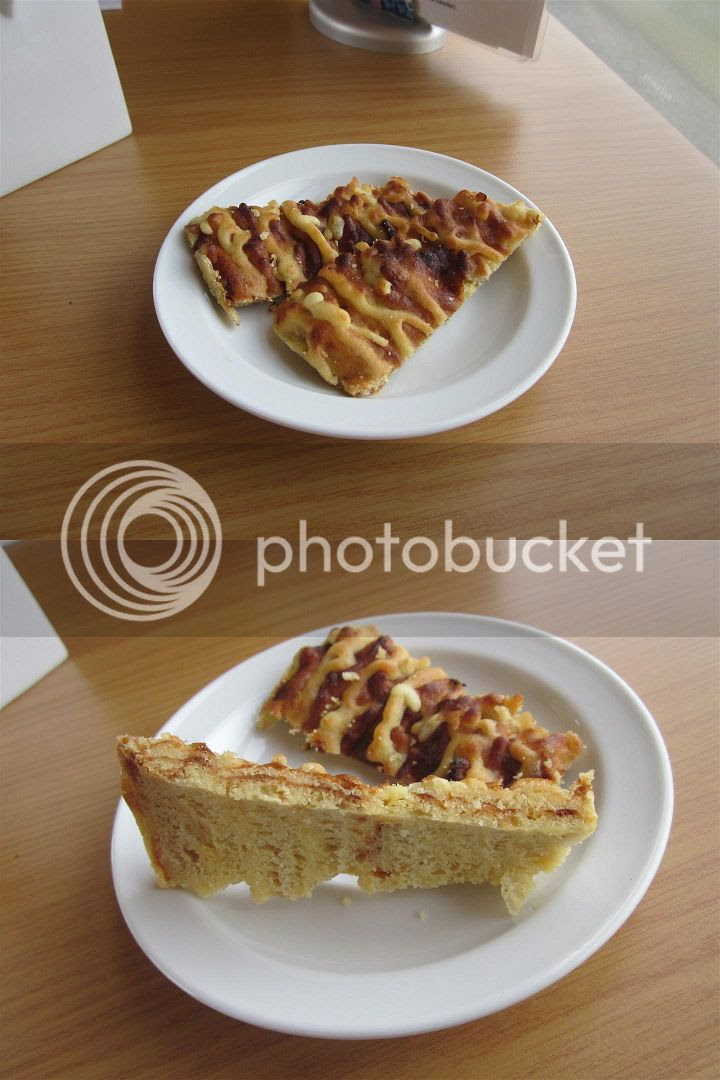 
I was surprised to see a spitcake sliced into quadrangles rather than rings! Their website shows gâteaux sliced into rings, so I can't tell which is the norm for this region and which is avant-garde presentation. And wow, I thought that other bakery's cakes had irregular layering! This is so unlike baumkuchen! What a wonderful, diverse spitcake universe exists!
I bought a cake from Védère, got smashed on some phenomenal local beers, and miraculously awoke at home in Madrid. Over the next couple of weeks, I tore down those two spitcakes with the help of friends and family. 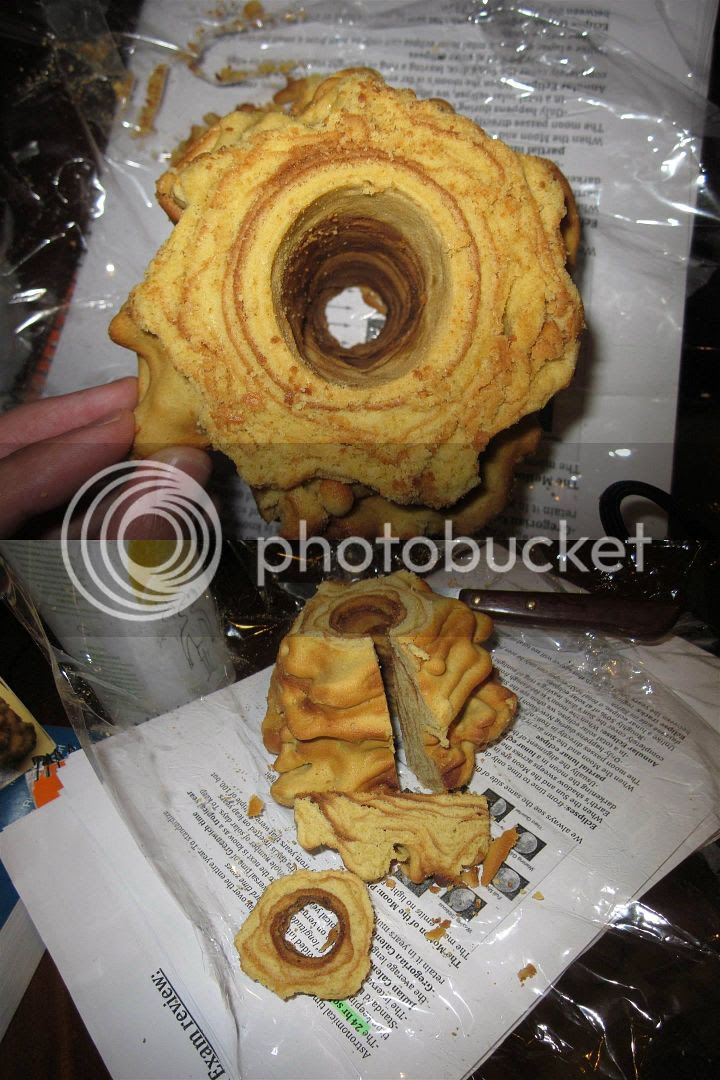 My cake from Le Pic Bigourdan.


My cake from Le Pic Bigourdan was very hearty, not too sweet, with vanilla and an indistinct liqueur flavoring. I love the appearance of the cross section. 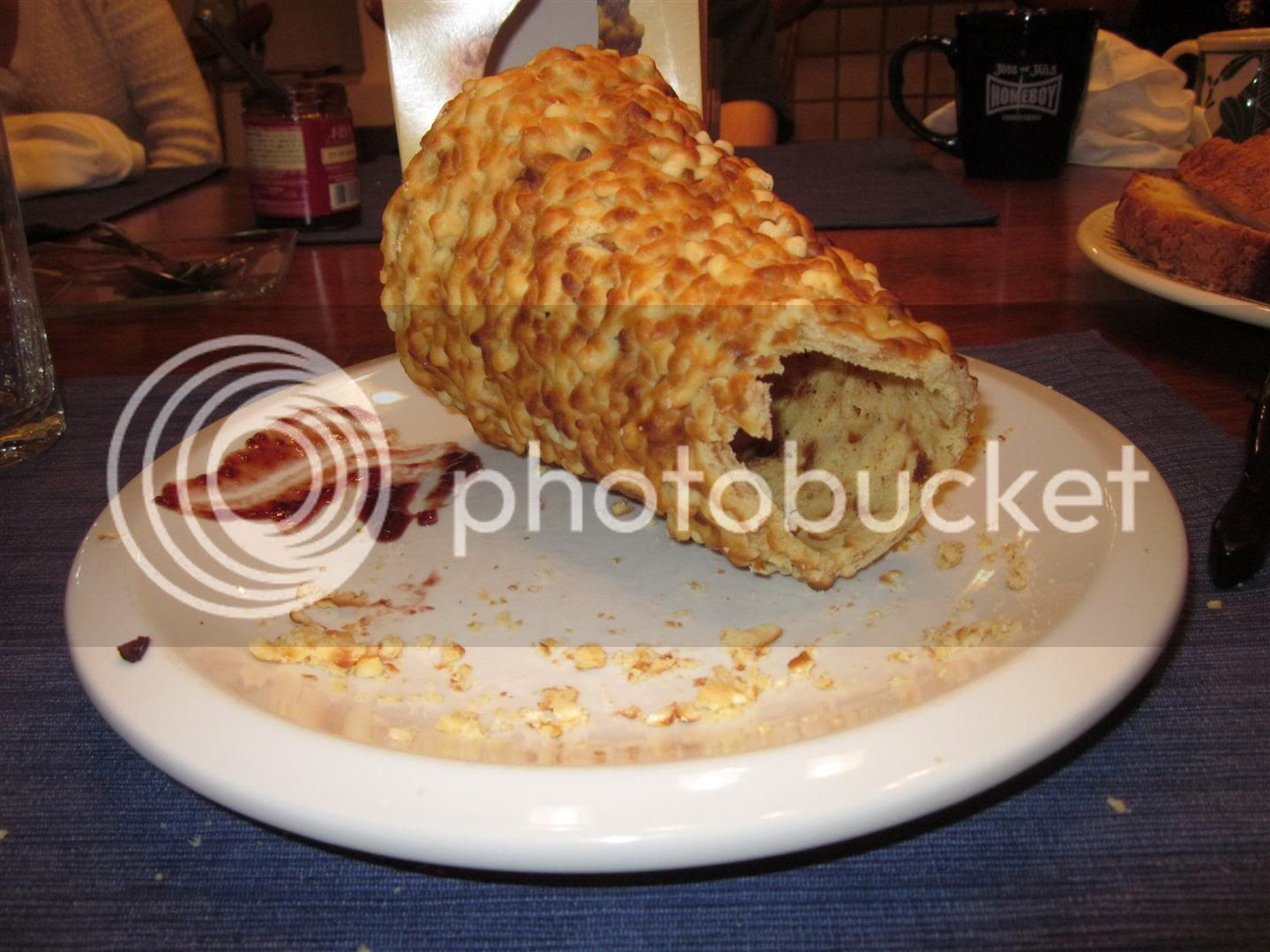 My cake from Biscuiterie Védère.


My cake from Védère was surprisingly moist, considering how thin the cake was. A strong taste of rum and eggs, and a great texture. I wish the cake were thicker, but I don't know how that would alter its good qualities.
* * *
I chose Tarbes and Montgaillard because internet research promised I could try two cakes in one outing. Having actually gone to the area, I discovered I likely could have gotten gâteaux from the town of Pau, or Lourdes, or Lannemezan, or probably any of the towns with markets (read: ALL OF THEM). 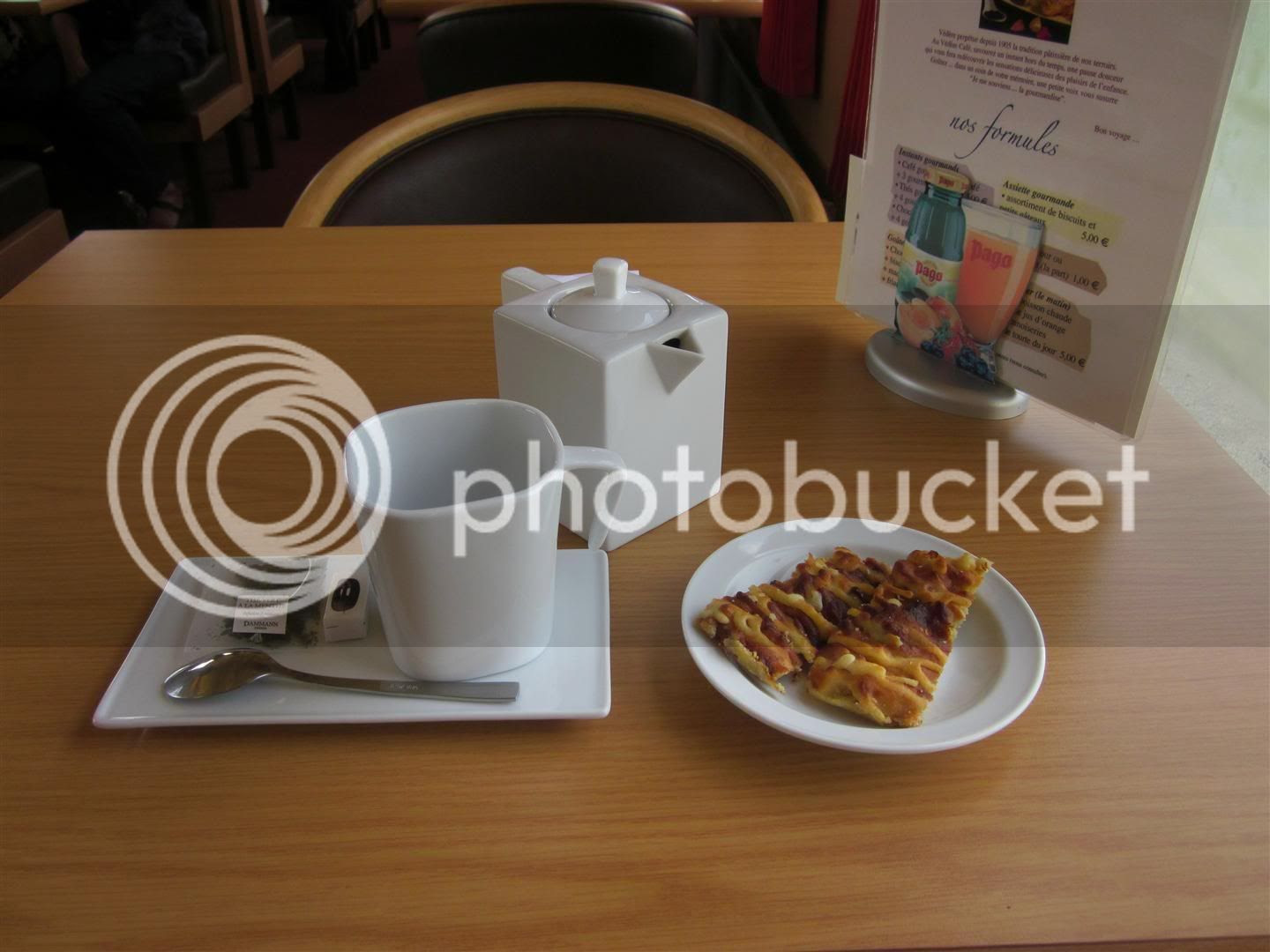 Posted by Ushanka at 9:34 PM No comments: