Before I finish my story of the three cakes, here's a two-part video of a Japanese DIY job featuring an excellent overdramatic musical selection! 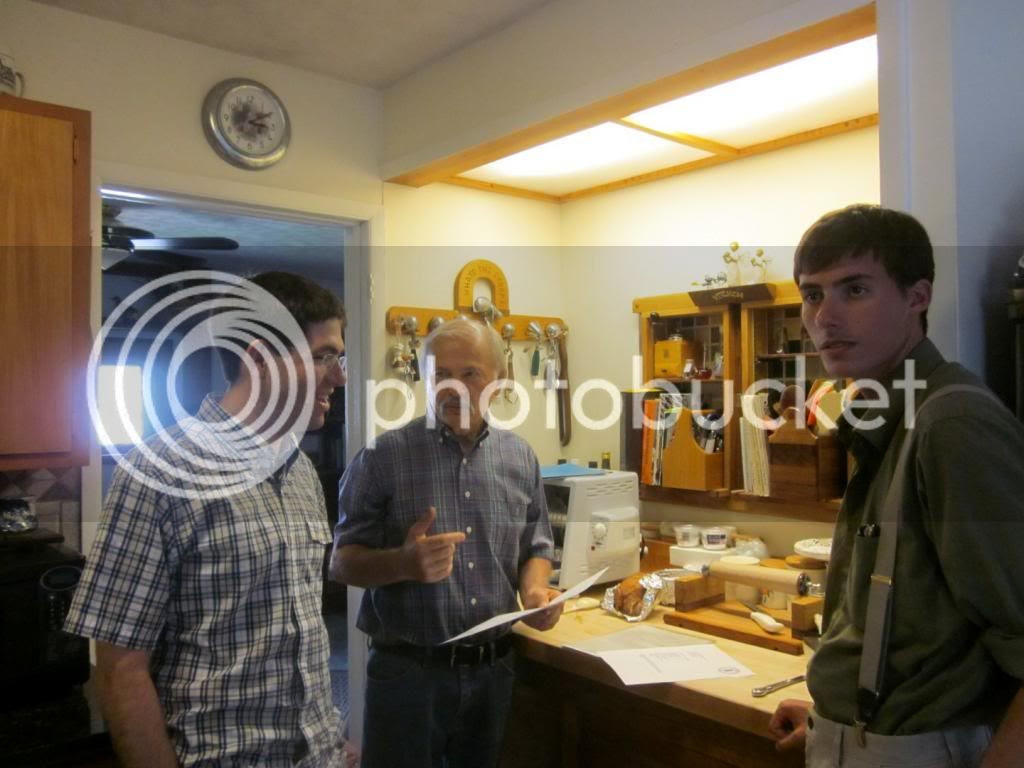 
I've mentioned Herr Taesler before. Last July I actually got to meet him! I think we were both equally excited about the encounter, because it meant a rare opportunity to discuss an odd interest in person.

The tour of baumkuchen Mecca began, of course, in the kitchen. Hr. Taesler doesn't use a Ronco Rotisserie, as I first supposed--it's a similar product, but reaches a higher top temperature. Klaus has special modifications for his tapered baumkuchen forms (below, you can see one artfully bound in string, a traditional tying method that helps the first layers adhere). He described the heat from the near-constantly open oven as physically taxing, especially in the summer; fortunately, most of his orders come near Christmastime. There's a lot of finessing and tweaking to make sure the cakes turn out superbly. He gave me a lot of practical advice: The first layers' adhesion is critical. There's nothing worse than seeing a nearly-done cake fall apart in the oven. As soon as you can, wrap the fully-baked cake in plastic wrap so it stays moist while cooling. Try making multiple batters with different flavorings and alternate which one you use on each layer.

Everything about the experience gave a mystical sense of passing on a dying craft. 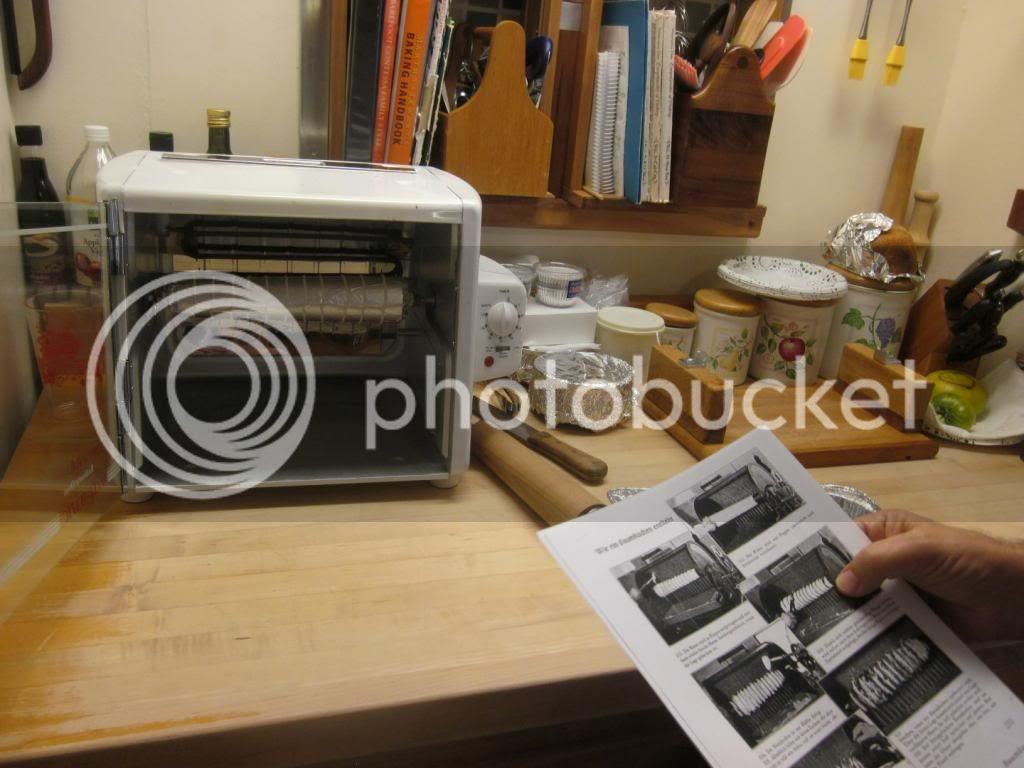 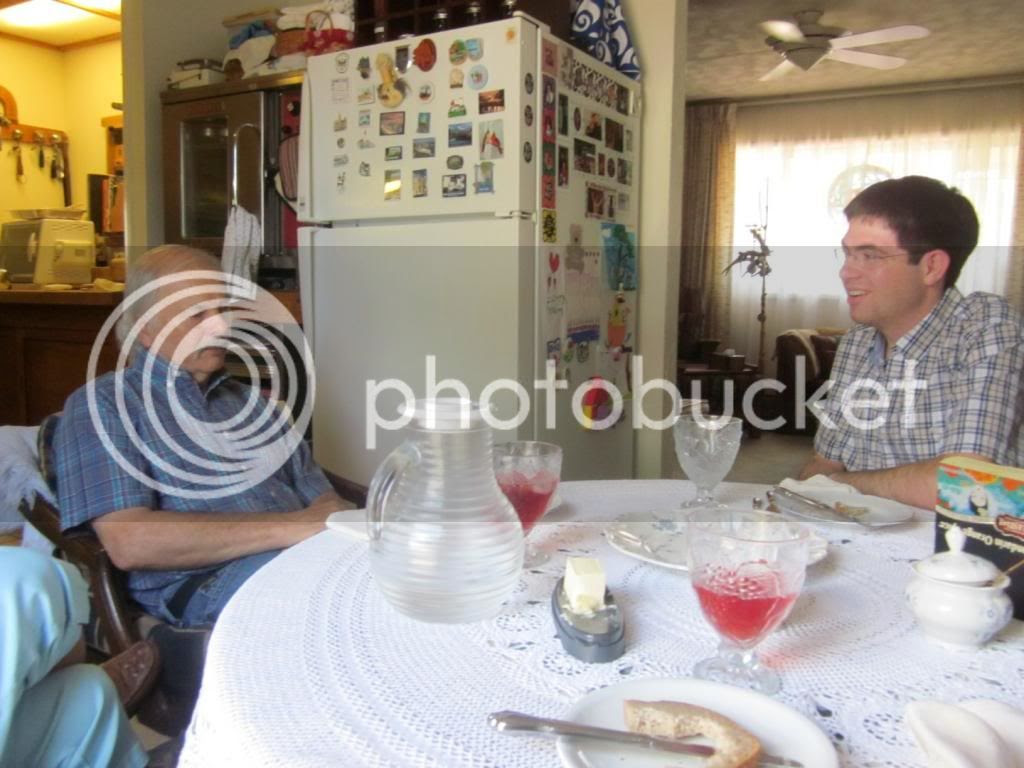 We continued talking over tea. The Taeslers shared with us some hearty homemade black bread, and showed off an antique Swiss crossbow so big that it took two soldiers to load it. Naturally, we tried some of his baumkuchen here too. The fresh cream and chocolate ganache filling the center were heavenly, and the flavors that ring out in the cake itself were, to me, strong reminders of the vast differences between artisanal hand-made baumkuchen and automated robot baumkuchen. It was a terrific day.

The cakes themselves get a fuller analysis in the next post! 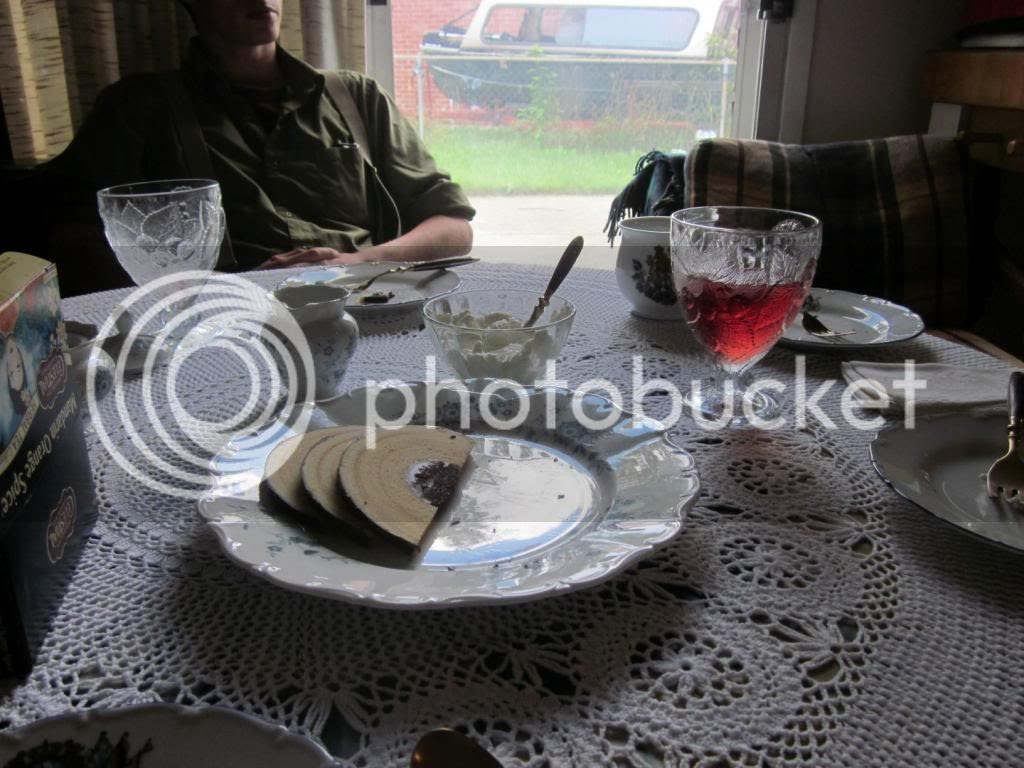 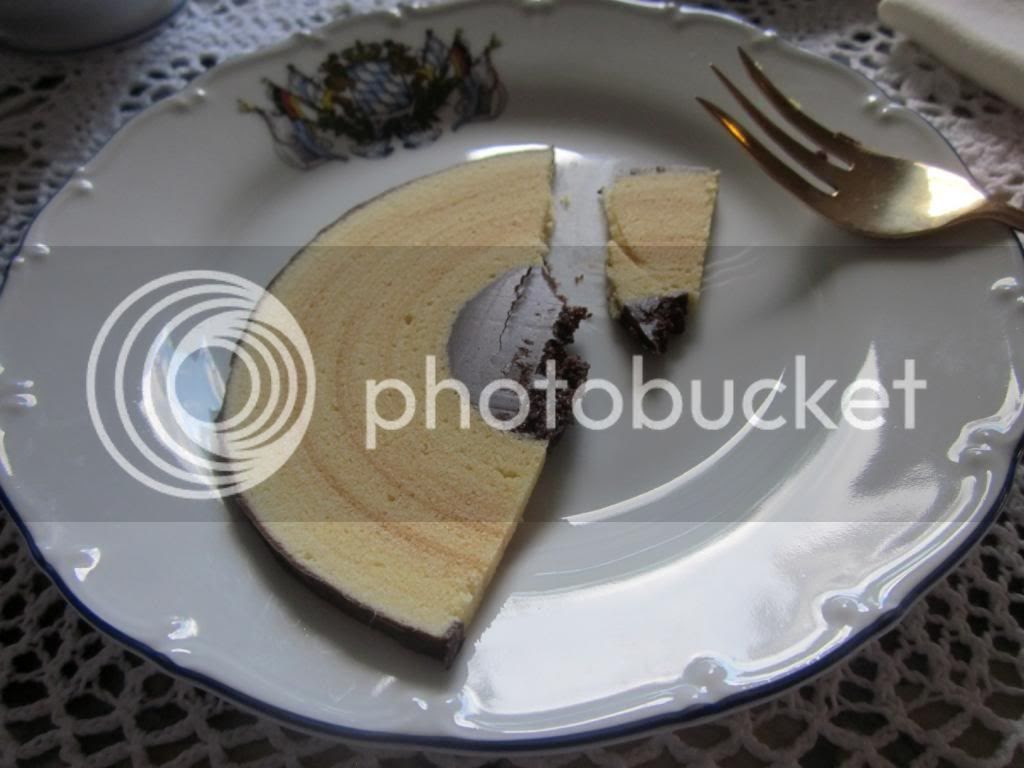 Posted by Ushanka at 8:49 PM No comments:

Opportunities for spitcake tourism are few and far between, so three cakes in two days is something special. Maybe a record! Definitely a record for "hardest trip to explain to my roommates."

My last day in Chicago, at the height of summer, was my day to get spitcakes with my copilot (who is also named Sam). I knew that Chi-tonw was home to Lutz Café, up by Horner Park, and Racine in the Polish-Lithuanian southwest side. 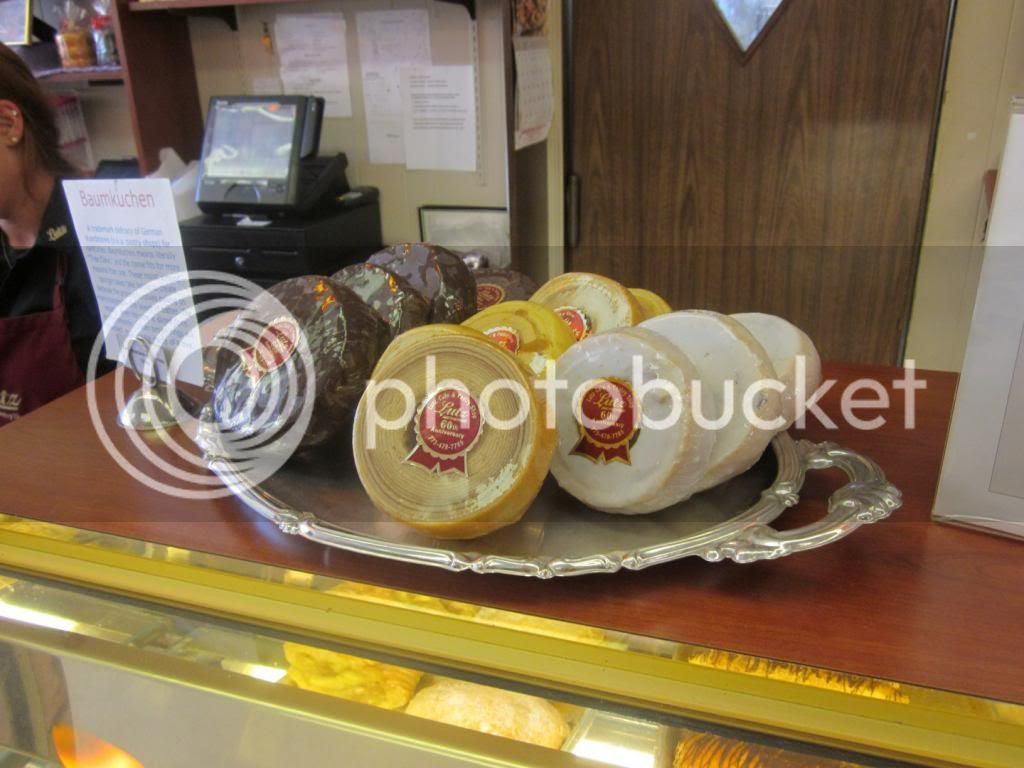 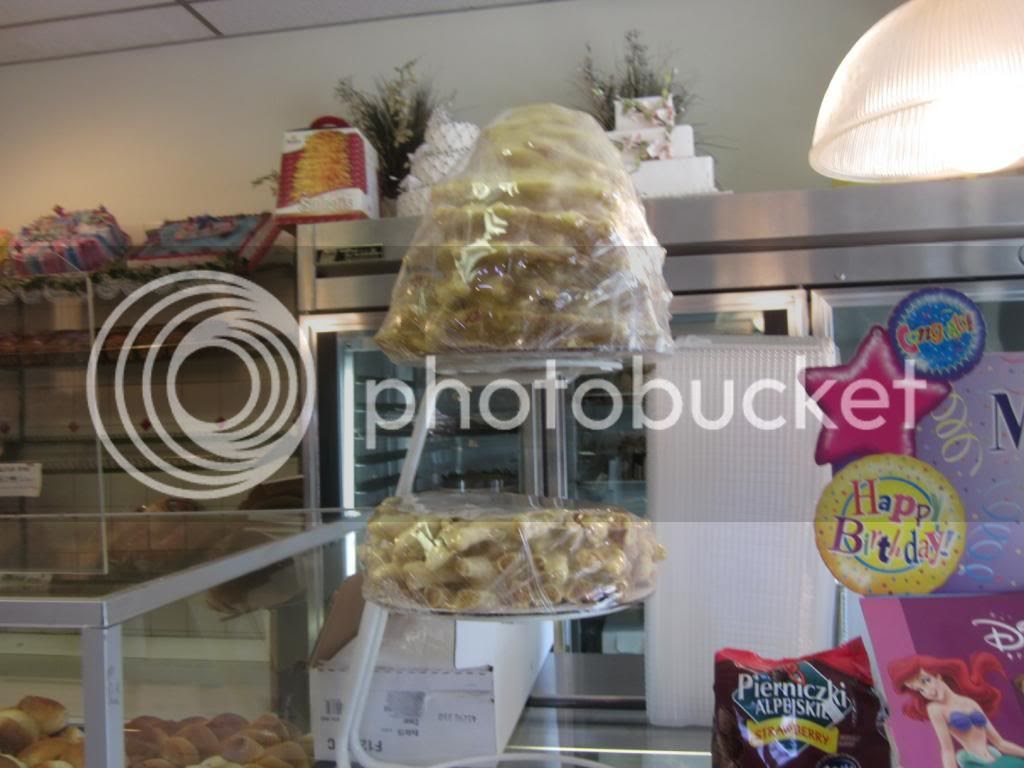 
Lutz Café, which offers baumkuchen, is very much a restaurant and tea room. Racine is rather a specialty supermarket which happens to have šakotis (which they call raguolis, equally valid). Both places bake their cakes on-site, though only Lutz has the option of eating it there. Most are packaged up and sold just like a mass-produced confection. This seemed unjust to me, but I didn't have much time to dwell on it. Sam and I splurged on cakes, loaded them into a cooler, and early next morning set off for a little hamlet in Ohio, to meet a man who needs no introduction...
Posted by Ushanka at 3:29 PM No comments:

It is abundantly clear that my time management skills are poor

NINE MONTHS AGO, I engaged in a trans-America roadtrip with several stops just for spitcakes. I'm going to split this story into several posts, but they are going to go up THIS WEEKEND.
Posted by Ushanka at 2:30 PM No comments: