The Wall Street Journal did a weird interactive thing last year, marking the centennial of the start of World War I by exploring its lasting effects. Most of the videos were serious and somber, but there were a few lighthearted puff pieces. One such piece: Cake in Japan. Enjoy!

NOTE: the dubbed voice does not pronounce "baumkuchen" correctly, don't believe the voice!

Posted by Ushanka at 9:35 AM No comments:

I've been doing lots of historical spitcake reading, and one particular find has got me in a tizzy. There is a Yahoo! group, still active no less, transcribing and translating all sorts of old cookbooks for this digital age! The main focus of the group is Marx Rumpolt's Ein new Kochbuch from 1581, which Wikipedia calls "the first textbook for professional chefs in training." This book is too early in spitcake development, so it doesn't feature the phrase baumkuchen, but it does give a recipe for Spieß kuchen (spit cake) and recommends serving it to nobility as the third (final) course of the first meal of the day.

Take warm milk and beat eggs with it / mix a dough with fair white flour / take little beer yeast and butter to it / let it stand a while behind the oven / that it rises / make it again into a ball / and salt it a little / then roll it out cleanly / throw black raisins over it. Take a Walger (roller) / that is warm / and rubbed with butter / and lay it on the dough / wrap the dough over / and tie it together with a twine / so it does not fall off / lay to the fire and turn slowly / like this will it roast cleanly. And when it becomes brown then take a brush / and put it into hot butter / and coat the cake with it / like this it will be a beautiful brown. And when it is roasted / so take it off the roller spit / and put into both holes with a clean cloth / that the heat remains / let it remain like this / until it is cool so give cold on a table / so it becomes tender and good. And one calls it Spiesskuchen.

As you can see, it's a chimney cake, not a tree cake. Supposedly, the first real tree cake is mentioned only one year later, in Nuremberg, by Susanna Harsdörfer. But that recipe, like I mentioned in the last post, is hand-written and I'm still working out the translation. However, now that I've discovered this DELIGHTFUL Yahoo! group, I think it'll go a little easier!

Transliteration and translation by Sharon Palmer aka Ranvaig Weaver, © 2013.

Posted by Ushanka at 8:04 PM No comments:

The cake things I've been doing

I'm learning lots of cake history from Kurtos dot EU! I've been focusing my efforts for now on two old recipes. This one is from 1582 and supposedly describes the first layered spitcake (i.e., the first tree cake). A second one (whose transcription/translation I haven't put online yet) is from 1769, containing the first "modern" baumkuchen recipe. I'm not sure what "modern" means in that context, but that's the description used by Fritz Hahn. Fritz Hahn, by the way, was a baumkuchen historian who did a ton of very useful research in the 1960s and cited his sources very well. Me discovering him is the reason why I've suddenly switched to paleography and historical fact-finding.

Posted by Ushanka at 4:39 PM No comments:

Mimi Sheraton's article is back online

Mimi Sheraton wrote an article for The New Yorker back in '09. It was paywall-blocked for a while, but it's free for all now. Check it out!. 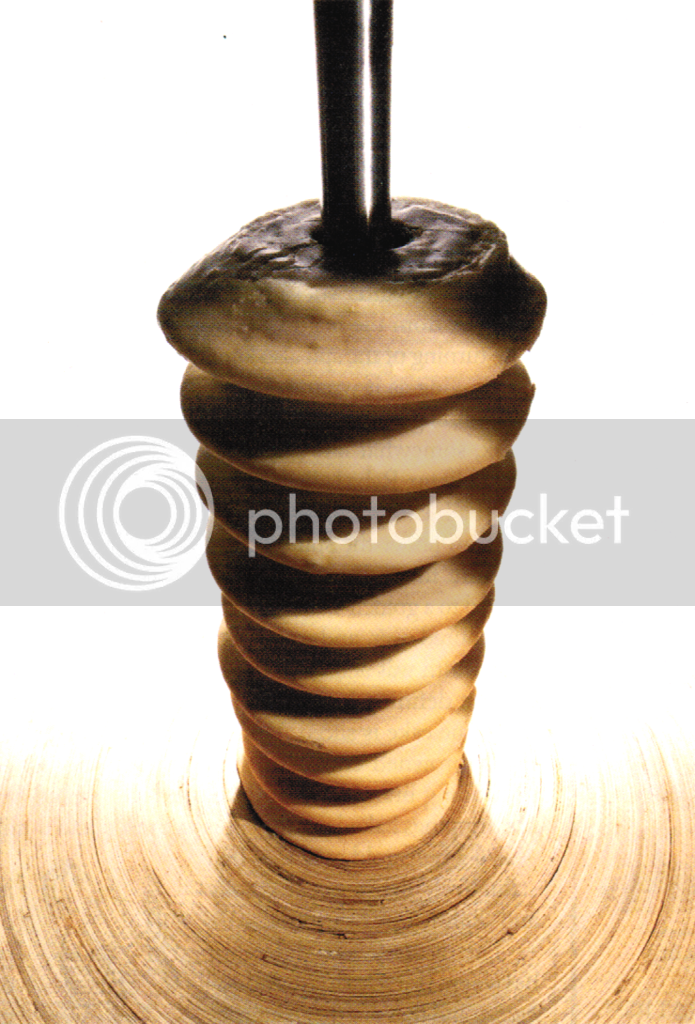 Here is an updated version of the digital cake machine from earlier. Enjoy!

Technical details: It's a 1:6 scale design that I'm printing on my Průša i3 printer. The pulleys (gold) are connected by rubber bands, so by turning that crank you can spin the cake whether it's inside or out of the oven. The long handlebars let the user slide the cake in or out. The cams on either side of the cake (the things that look like Darth Vader's helmet) hit the little nubs on the oven doors, forcing them open only when necessary—thus minimizing heat loss.
Posted by Ushanka at 2:10 PM No comments:

I've written about a couple big tree cakes before ([1], [2]), and often wondered if there's a governing body for claimants to the title of "largest tree cake." Well, according to various Lithuanian news sources, there may be a definitive champion, as of May 30 this year.

Do you see that mother of all cakes? It's 3.7 meters long and weighs 86 kilograms (not including the rotisserie)! Lrytas.lt reports that the batter was made with 49 kg sugar, 63 kg flour, 43 kg of various lipids, and 1700 eggs. Seventeen hundred eggs.

That same article reports that the bakers actually made TWO mega-šakočių. To qualify for the Guinness Book of World Records, the šakotis had to be cut up and eaten. But the Šakotis Museum wanted it as a trophy, too! So, naturally, that meant baking another 3.7-meter cake, and magically resisting the temptation to eat it.

So, that cake will soon show up as the Guinness Book's largest tree cake. But what about the longest tree cake? That separate record goes to the Japanese village of Chizuken. On May 10th this year, 880 volunteers prepared a baumkuchen that was 16.480 meters long. That's three giraffes, plus a guinea pig. They had originally been building a 20.327-meter cake, but part of it sheared off—a common baumkuchen disaster. Still, it was enough to break the previous record (14.654 meters, also made in Chizuken). And, like one of the giant šakotis from Lithuania, it all got eaten by volunteers. Tastes like victory.

Posted by Ushanka at 8:07 PM No comments: