I spent a big part of Saturday, July 24 making my way from Charlton (way down south) to Wood Green (way the crap up north). Why? Sweet Tree Bakery, baby! Possibly the only spitcakery in the British Isles, it makes both baumkuchen and šakotis! How could I miss this?

Sweet Tree Bakery is hardcore. They cultivate natural yeast for about half of their breads, utilizing all sorts of tasty fruits and grains to make every loaf special. Two Bavarian ladies are in charge of the breads and jams, and a Japanese man bakes the pastries, including the spitcakes. None of them are native Anglophones; they all speak with incredibly thick accents, and they were unable to understand my dialect (American plus difficulty with liquids). This led to a great game of telephone: I would ask a question in my dialect, then another customer (a gentleman in a Mr. Bungle t-shirt, I will refer to him as Mr. Bungle) would repeat the question in one of the London dialects, then one of the bakers would answer and I would have to spend about twenty seconds analyzing their speech for comprehension. But I digress. How were the spitcakes?

Well, I only had baumkuchen. It's true that STB bakes both varieties, but only one kind per day. I happened to arrive on a baumkuchen day. If I had gone there on Friday, or if I came back again on Sunday, I could have gotten šakotis. 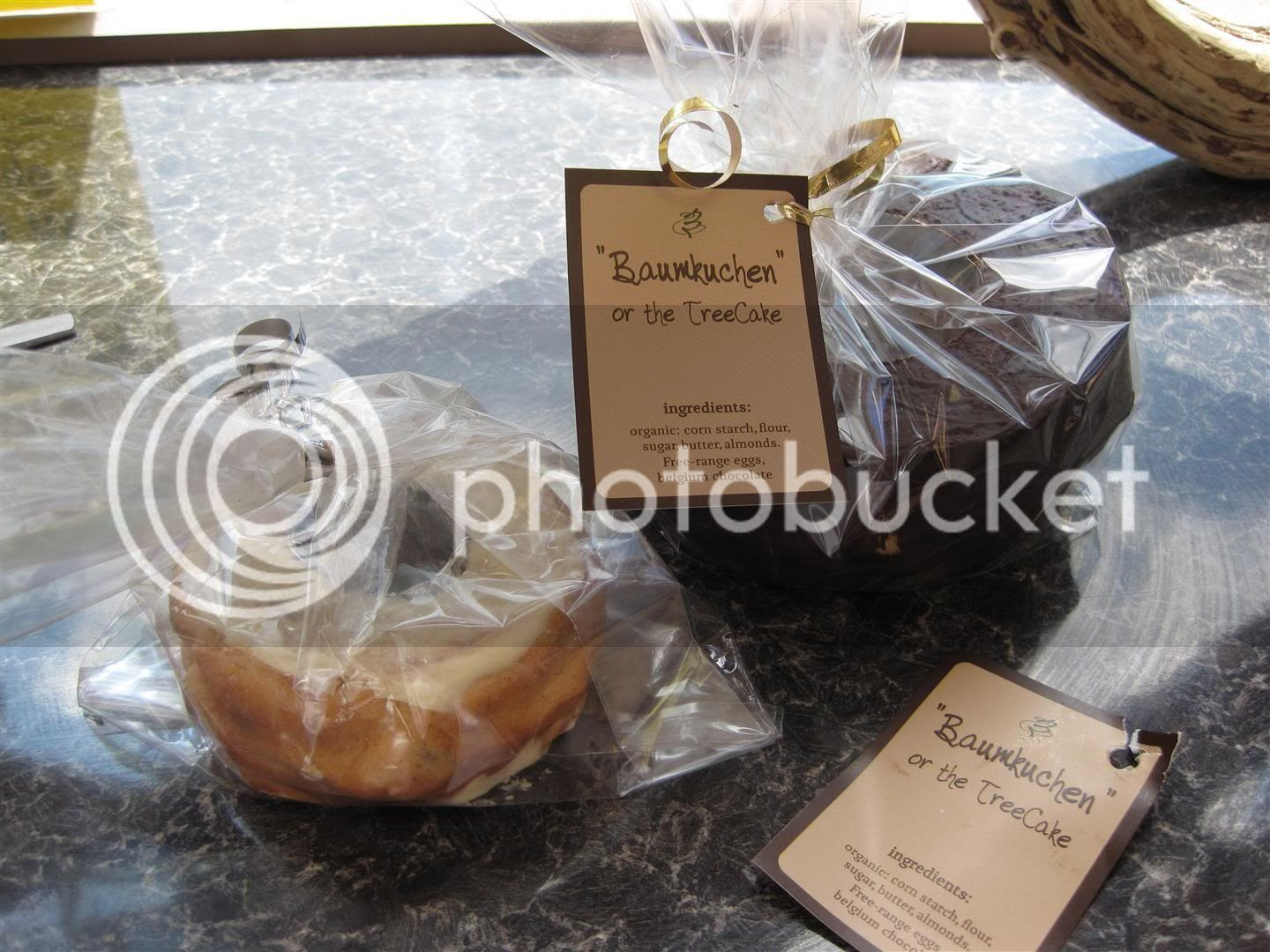 Was it good? Oh yes. Oh. Yes. The cake itself was just a little sweet, the icing mellow, the texture out of this world. I thought it got better with every bite. That baker puts all his effort into making the best product possible, and it shows, man.

After some more fumbling with words and having Mr. Bungle act as interpreter, they agreed to let me into the kitchen and see the cake machine as long as I didn't touch anything. Oh, joy unbounded! 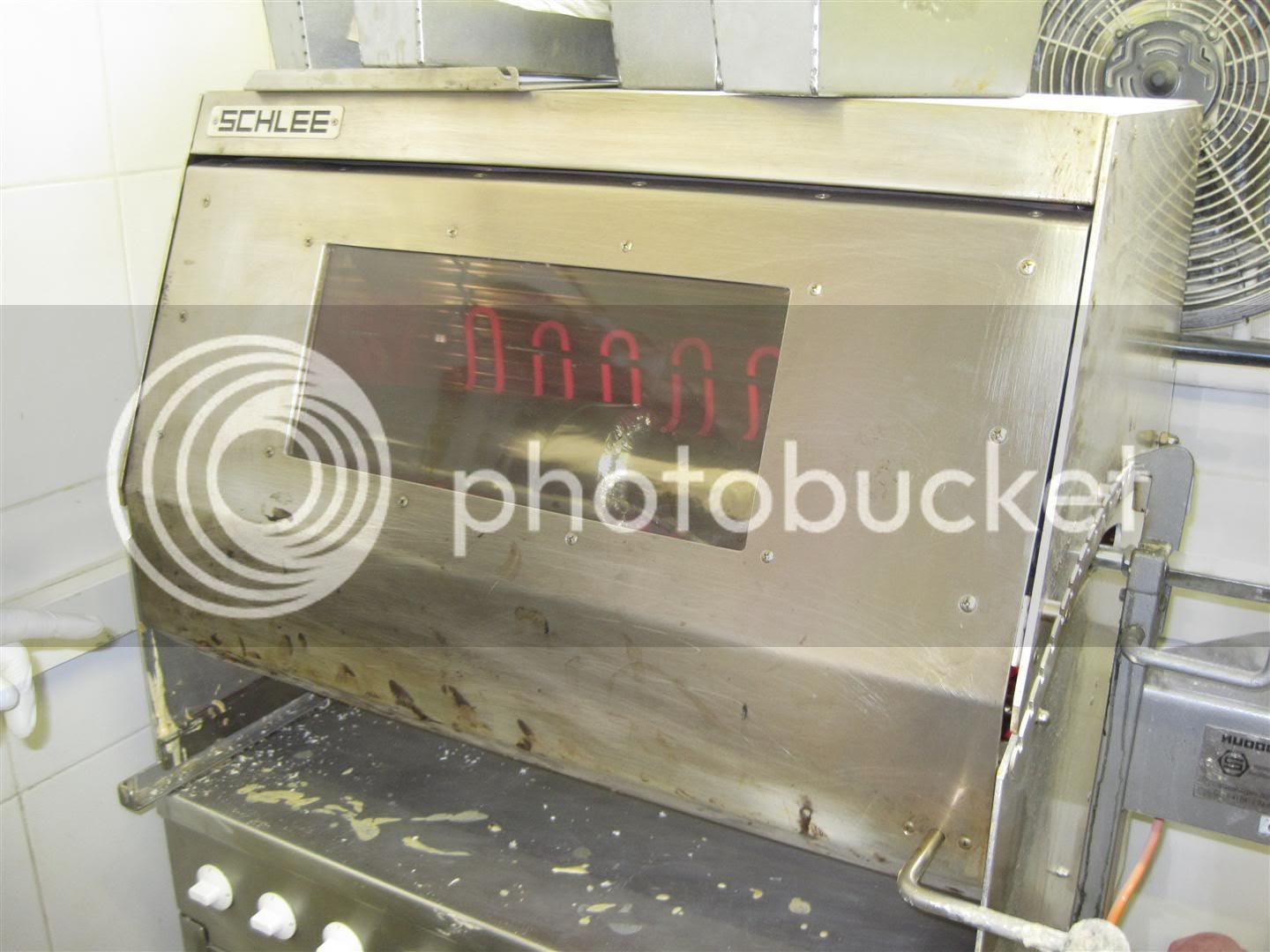 There it is, in all its glory. The Cake Machine. An angelic chorus is singing. This machine was manufactured by Schlee GmbH. It's electric, as you can see, and relies on three-phase power, presumably for the large motor.

Do you see that huge fan behind the oven? It's not the only one. There was an array of fans, I think five, along that wall, spinning their little hearts out. And it was still so damn hot in that room! Definitely over 40°C (100°F).

So now I'm a little worried about a cake machine in a van. For one thing, three-phase is out of the question. And unless I've got all the doors thrown open, I might cook myself in there, alongside the cake. Vamos a ver.
Posted by Ushanka at 1:08 AM No comments:

My heating element will be electric.

Photos of my cake adventure in England will follow. For now, check out this diagram I made.

Return to the Baby George Rotisserie

I've been talking about cake on this blog since April 2008. Since then, I think I've made it clear that I'm not very good at research, design, construction, baking, or blogging. But I'm always making progress, no matter how slight or how slow!

There's so much information out there. I just get bothered when I realize that I could have theoretically avoided pitfalls years ago with only a modicum of effort. And this happens often! I could have saved myself a lot of trouble if I had just seen the following site when I began.

Baumkuchen USA is the mail-order business of some dude named Klaus in Piqua, Ohio. He ships baumkuchen that he bakes himself "in a custom built rotisserie." But look at the pictures on his site: 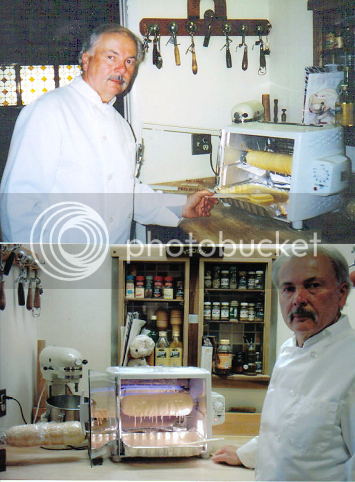 That is clearly a Ronco Showtime Rotisserie! I have no idea what customizations there are in his machine (if any), but it looks like he's baking baumkuchen in a perfectly normal rotisserie. I think this means I could have potentially been baking baumkuchen since Cake Weekend in December 2008.

As always, I'm making up for lost time. I gave the George Foreman rotisserie a thorough cleaning, inside and out, then pulled off some spikes on the spit itself to make it more cake-friendly. More to follow! Stay tuned.
Posted by Ushanka at 3:21 PM 2 comments:

That video I posted yesterday was a little confusing to me. I couldn't figure out why the chefs were spinning the cake so fast! Well, now I have my answer. As more layers are added, the baker spins the cake faster, causing flecks of batter to fly off and form peaks. Wow.

I'm not going to lie: compared to baumkuchen, šakotis seems more challenging, more impressive, and more fun to bake. It all adds to the respect I have for the people who made that giant šakotis.

Also, if you look at the pictures in the above link, you can clearly see electric heating elements! Good to know.
Posted by Ushanka at 12:04 PM No comments:

Remember when I posted a link to that giant šakotis? I've located a Russian news story on it!. At the moment I'm just admiring the video, but I promise I'll have a translation later today.

Looking at the size of the fires that are used to bake these spitcakes makes me realize just how badly I underestimated the amount of fuel I needed for my most recent test. Hmmmm...

(Skip to 41 seconds into the video if you just want to see the cake.)

Posted by Ushanka at 1:07 AM No comments:

I still want to build a cake machine, it's true. The major impetus to actually doing so is that I don't know the best way to provide heat. My options are electric, gas, and wood. I wish I could consult some heating experts, but I don't know any. I tried wandering into a grill-and-fireplace supply store this afternoon, but the clerks were not helpful at all. Tragisch.

ELECTRIC HEATING
Electric heating has been recommended by some people. My small-scale tests with electric heaters suggested that they can probably get a full-size oven up to the operating temperature range. Unfortunately, I have no idea what to do from here. There are so many kinds of electric heaters and I don't know where to get ones that are the appropriate size and shape for my rather specific application! Some of the Schlee GmbH machines use infrared bulbs, so I think I would do likewise. But I don't know exactly what I'm looking for in a bulb, so I could end up throwing my money away.

GAS HEATING
Gas is quicker to start than electric heating. I could stop it and restart it when I need to open the oven and apply batter. But I'm more likely to blow myself up. The Schlee machines that don't use electric use something called "infrared gas heating" and I can't find any good resources on this. There are plenty of resources on how to make pipe burners that I could use, but again, I run the risk of blowing myself up.

WOOD OR CHARCOAL HEATING
Wood fires are the traditional heat source for baumkuchen. But I'm worried that it might compromise the taste! I do not know if this is a valid concern. This is probably also a lot easier to get started with now, and I could eventually graduate to a gas or electric heater later.

Now, onto the issue of getting a metal drum for my oven!
Posted by Ushanka at 3:42 PM No comments:

My family ate about 2/3 of that baumkuchen I bought in January. We stowed the remainder in an airtight container in our freezer. Now, four and a half months later, we've pulled it out to celebrate my return from another successful semester at school. It's still moist, still delicious, and it didn't give me food poisoning. I feel that it's reasonable to say that your Cake Box baumkuchen will keep in the freezer for at least 5 months!

I take no responsibility if you take this advice and become ill.
Posted by Ushanka at 11:55 PM No comments:

Why, what's this bag? 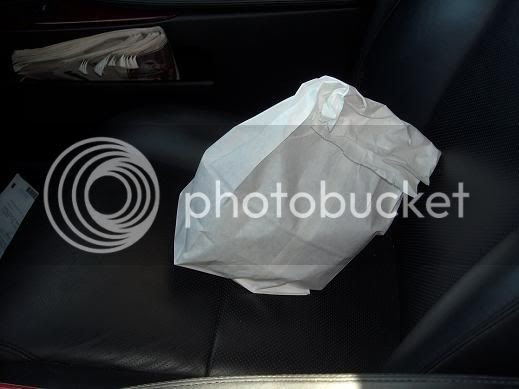 Why, it appears to be a cake! 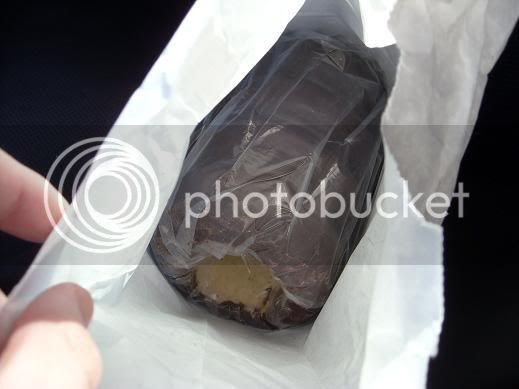 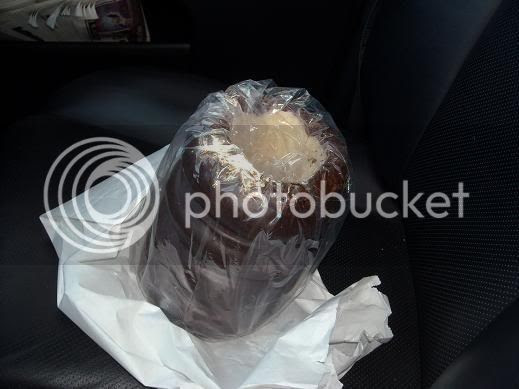 This photos are of the cake I got from the Cake Box, taken right after I left. I need to reiterate that it was way tastier than its machine-made Japanese counterparts.
Posted by Ushanka at 11:29 PM 1 comment:

Anyone with an obsession will get asked, "Why?" It's unavoidable. I don't have a great answer for why I love rotisserie cakes. However, I've got a few rationalizations: the novelty, the effort required, the infinite scalability.

I never had a really good picture to illustrate this concept, until tonight. Ethan R. found the picture that I've always wanted (but never thought existed). It's part of a story about Lithuanians (my people!) baking a world-record Šakotis. Šakotis is the Lithuanian rotisserie cake! The primary difference between it and baumkuchen is that šakotis batter is dribbled unevenly onto a conical form, and baumkuchen batter is brushed evenly onto a cylindrical form. But I digress. 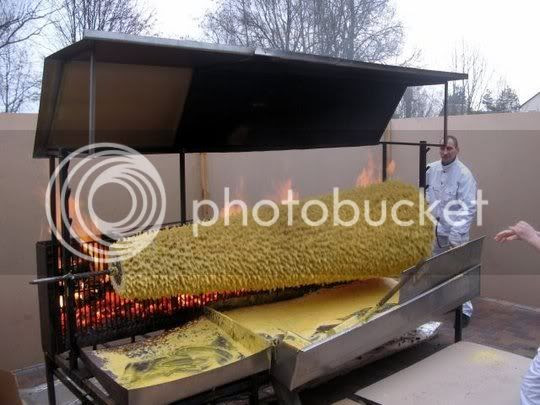 Original article
Posted by Ushanka at 10:37 PM No comments:

Cake Box is a fantastic place. A very European shop with very European service. I immediately purchased a large chunk of chocolate-glazed baumkuchen, then spent about twenty minutes just chatting with the proprietors. Chef Paul Gauweiler is probably the only Baumkuchen artisan within 2000 kilometers, and I got to chat with him and his wife/sous-chef! They were unabashedly excited to learn that there are youths who want to keep the traditional Baumkuchen-making methods alive.

Their baumkuchen oven, an 80 year old dual-gas-electric machine, sits in the corner of the shop, in plain view. They wouldn't let me take pictures, but it did look an awful lot like a 55-gallon metal drum slit lengthwise.

Anyway, the cake. It was much moister than the flatkuchen Eidolon and I made earlier, but the flavor was about the same (in other words, phenomenal). The layers were just a wee bit thinner than ours were, but still much larger and more uneven than the Japanese machine-made ones. Overall, it makes me think that I could make Baumkuchen if I really tried!
Posted by Ushanka at 8:46 PM No comments: